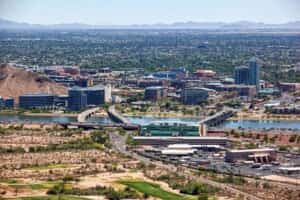 The Grand Canyon State is named after one of the nation’s most revered national treasures; a chasm approximately a mile deep, affectionally deemed the Grand Canyon. Although the state is completely landlocked, its beauty is abundant throughout its landscape. There are mountainous regions that provide picturesque views, as well as cactus-filled deserts that depict a horizon as far as the eye can see. In fact, Arizona’s largest downfall may not even be considered one by most, the weather. Its one of the hottest states in the country and has reached record of highs of over 128 degrees Fahrenheit. As you could imagine, this extreme heat coupled with some of Arizona’s desert regions, could become quite dangerous.

However, as it relates to home insurance, Arizona’s landlocked nature protects it from most natural disasters. Essentially, leaving property owners with the basic perils of fire, theft, vandalism, and others that are covered by the standard property policy, to protect against.

Arizonians pay relatively low premiums for homeowners and renters insurance when compared to the rest of the country. The fact that the Grand Canyon State is essentially buffered through its landlocked nature, alleviates any real risk of an insurance carrier enduring significant financial loss due to a natural disaster. As a result, the standard property policy which offers protection from loss of use, personal liability and a host of similar coverages, is more than adequate.

Although the risk of natural disasters occurring in Arizona is relatively low; Arizona does occasionally suffer loss due to flooding, or even wildfires. Property owners can seek coverage through the National Flood Insurance Program (NFIP) or in the surplus market. The basic property insurance policy typically covers damage due to fire (wildfire included), but could differ from region to region. Thus, make sure to review your policy in detail.

Arizona’s lack of risk as it relates to catastrophic loss due to natural disasters, affords Arizonians a plethora of insurance carriers to choose from. Typically, the financial stability of a particular carrier should be at the top of the list when comparing insurance companies and their respective packages. However, given the probability of a carrier going bankrupt due to an Arizona-based catastrophic loss is low, regional players should be heavily considered as well when trying to ascertain who to partner with.

If you’re lucky enough to own property in the beautiful Grand Canyon State, make sure you compare as many carriers and their respective insurance packages, as possible. The favorable region and landlocked nature of the state makes property insurance a relatively good investment for carriers. As a result, they will certainly fight for your business. Ultimately, you benefit with adequate coverage at great rates.