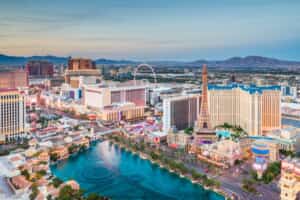 The Silver State is undoubtedly known for the bright lights and constant action emanating from the strip in Las Vegas. It’s understandable given Sin City reportedly, never sleeps. However, there is considerably more to Nevada than the slot machines and great entertainment offered in Las Vegas. From the Hoover Dam to Lake Tahoe, there are parts of Nevada that place the state’s beauty on full exhibition. Although the Silver State is at the top of most people’s lists for places to visit, majority of the state’s land is inhabitable due to its barren and desert terrain. The result is a less congested state, and more land to explore for those outdoor enthusiasts.

Nevada doesn’t experience many natural disasters, but due to its dry climate and topography, it is prone to wildfires, earthquakes and floods. Historically, neither has inflicted consistent catastrophic loss within the state.

Although a standard homeowners or renters insurance policy provides coverage for sustained damage from a wildfire (as well as other perils such as theft and vandalism), property owners in Nevada should also look to bolster their coverage with separate flood and earthquake policies. Even though the state has an extremely dry climate, floods do occasionally occur due to heavy rains and drainage. Also, most people forget that Nevada sits on active fault lines. So, although the state does not experience catastrophic earthquakes frequently, there is seismic activity in the region, thus the possibility of a large-scale earthquake does exist.

Nevadans have quite a few carriers to choose from when looking for a homeowners or renters insurance partner. The market is dominated by national carriers, however, due to the low potential of experiencing a catastrophic loss from a natural disaster, regional carriers should also be included when looking for the right carrier and package. Note that given the standard insurance policy does not cover flood or earthquake, property owners should also peruse the nonstandard market for coverage for these perils. Although, they do not occur frequently, nor do they typically impose large scale loss, its better to be safe than sorry.

The Silver State is almost synonymous with Sin City. But like most states, Nevada has several layers to its charm. Deserts, lakes and canyons are but a few of those layers. In addition to these natural treasures, Nevada also is home to some of the lowest homeowners insurance rates in the country.