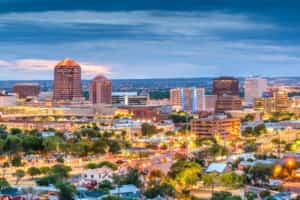 The Land of Enchantment certainly didn’t earn its nickname from being dull. From the beautiful caves at Carlsbad Caverns National Park, to the White Sands National Monument, New Mexico is home to landscapes you truly cannot experience anywhere else. In addition to its natural beauty, the state also boasts large metropolitan areas with cities such as Albuquerque and Santa Fe. Thus, nature lovers and those that feel more comfortable in the bright lights of a city can find reprieve in New Mexico. Nestled in the southwest of the U.S., the Land of Enchantment carries quite a bit of Native American and Hispanic history; both of which influence the incredible cuisine and art that’s available to visitors and those who call the state home.

New Mexico is completely landlocked, bordered by other states and Mexico to the south. As a result, the risk of catastrophic loss from natural disasters is relatively low. That said, New Mexicans tend to seek protection from severe thunderstorms that often times, involve large hail and potential flash flooding. Due to the state’s terrain and location in relation to the Rio Grande Valley, it also endures small tornadoes and earthquakes; neither typically results in significant property damage.

Given property owners’ largest risk from natural disasters is essentially damage caused by severe storms, a standard homeowners insurance policy typically provides adequate coverage. In addition to damage resulting from hail, or high winds, a standard policy also provides coverage for theft, vandalism, liability, and a host of other basic perils. Since flood and earthquake are usually excluded, New Mexicans living in designated flood zones or along the Rio Grande Valley should look to augment their standard coverage with separate flood and earthquake policies sourced from the surplus market.

The New Mexican property insurance market is fairly concentrated with the top five homeowners insurance companies controlling nearly 70% of the market. Although all the companies in the top five are national carriers, because of the low risk of catastrophic loss due to natural disasters, property owners in the Land of Enchantment should also include regional carriers as they search for potential partners.

New Mexico’s nickname certainly captures the magical nature of the state; it truly does enchant its visitors. Often times, to the extent whereby they end up calling the state home. And although New Mexico’s homeowners and renters insurance rates aren’t the best in the country, property owners have very little to worry about regarding catastrophic loss from natural disasters.