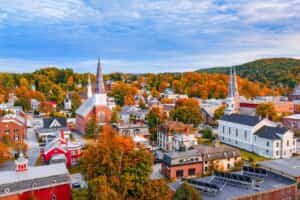 The Green Mountain State lives up to its nickname with thousands of acres of mountain terrain. Its natural landscape provides the perfect backdrop for hikers, skiers, and just about every other type of outdoor enthusiasts that exists. Vermont isn’t simply known for its enchanting scenery, or being the nation’s largest producer of maple syrup, but for its charming towns as well. In fact, Burlington attracts visitors and Vermonters alike with its plethora of shopping malls and bustling, vibrant restaurants and cafes.

Tucked in the Northeast, New England Region, the Green Mountain State can endure relatively brutal winters. As such, Vermonters often must prepare for the occasional flood and severe winter storm.

Vermonters enjoy some of the lowest rates in the country regarding homeowners and renters insurance. In fact, they pay the eleventh and thirteenth lowest premiums in the U.S. for homeowners and renters insurance, respectively. These favorable rates indicate that although the Green Mountain State can endure brutal snowstorms, and experience occasional flooding, the associated losses with these perils do not typically reach catastrophic levels.

Due to the lack of extreme risk of property loss in the region, most property owners in Vermont are adequately covered with the standard homeowners insurance policy. Coverage is provided for loss from fire, wind, theft, and several other normal perils. However, flood is specifically excluded. Thus, those Vermonters that reside in a flood zone should look to augment their overall property insurance package with purchasing a flood policy from the National Flood Insurance Program (NFIP).

The homeowners insurance market in Vermont is incredibly competitive, with the top five carriers in the region controlling under forty-nine percent of the market. The largest carrier only controls approximately thirteen percent of the market. In addition, the market is quite diverse with good representation from regional and national insurance carriers. This competition creates the perfect environment for Vermonters to find the right property insurance partner. When evaluating different carriers and their respective packages, remember to take note of each carriers’ reputation as it relates to honoring coverage and speed in which they handle claims.

The Green Mountain State is indeed heavily forested. For most of the year, this translates into a sea of dark green spread across the region, however, in the winter that is often layer upon layer of bright white snow. Regardless of time of year, Vermont undoubtedly has a natural beauty that simply accentuates its endearing charm. As if visitors or Vermonters needed anything else to love about this New England state, Vermont also enjoys some of the best homeowners and renters insurance rates in the country.