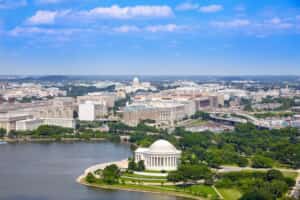 Washington D.C., although not a state, may just be the most important city in the United States. As the nation’s capital and home to the federal government, Washington D.C. is known all around the world. The Nation’s Capital is filled with incredible sights such as the White House, the domed Capital Building, and several museums/spaces dedicated to American history. In addition to these breathtaking sights, D.C. also is home to several great neighborhoods, such as Georgetown’s Historical District. Thus, whether you’re a historian or simply looking for a vibrant city with a lot to do, the Nation’s Capital will not leave you disappointed.

Tucked along the Potomac River between Maryland and Virginia, Washington D.C. is sometimes plagued by flooding and the occasional winter storm. Thankfully, the disasters the Nation’s Capital endures typically are not catastrophic.

Property owners in Washington D.C. pay average rates for homeowners insurance and reasonably low rates for renters. In fact, renters in the Nation’s Capital enjoy the sixteenth lowest insurance rates in the country. That said, the discrepancy in the gap between homeowners and renters insurance rates versus the rest of the country is due to carriers’ perceived risk of homes versus personal property. Carriers see the risk of loss to structures as relatively more severe than that of personal property.

Most property owners in the Washington D.C. will be adequately covered with the standard homeowners insurance policy. Coverage for fire, theft, liability and a host of other normal perils is included. However, flood is specifically excluded from the homeowners insurance policy. As such, those property owners in the Nation’s Capital that are situated near the Potomac or are in flood zones, should look to augment their property insurance packages with flood coverage from the National Flood Insurance Program (NFIP).

The homeowners insurance market in Washington D.C. is concentrated, with the top five carriers controlling over seventy percent of the market. However, the market is fairly distributed among the top carriers in the region. In fact, four carriers hold double digit percentage market share positions. Unfortunately, there are not many regional insurance carriers included among the region’s top carriers. As such, when looking for the proper insurance partner, make sure to include regional carriers in the process. Often times, regional carriers are better equipped to tailor coverage to customers’ specific risks. Also, take note of each carrier’s reputation for claims handling.

Washington D.C. is known across the world as the home of democracy. As such, many visit to see sites such as the Lincoln Memorial or the White House. There’s undeniable beauty in the buildings and monuments that compose the Nation’s Capital. This beauty is only bolstered by the vibrant culture that radiates from the city. Visitors and those lucky enough to call Washington D.C. home can attest to this.