Which Top-Selling 2013 Vehicle Gets the Best Insurance Rates? 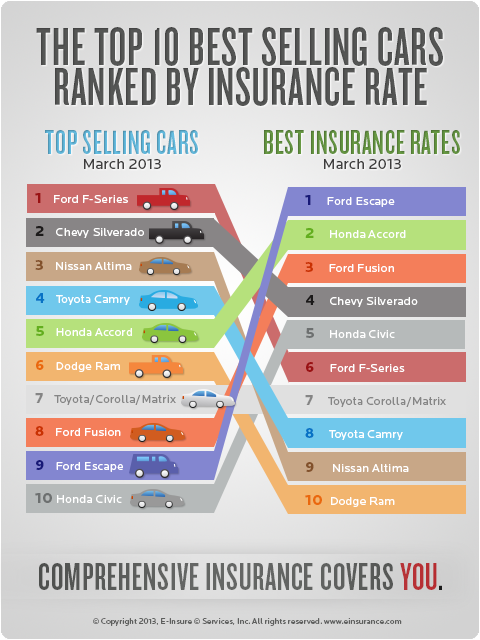 Summer is coming, and thousands of people are thinking of buying a new car this year. And why not? The American auto industry is making a big comeback, offering well-made vehicles that the public wants to buy again.

This year, 10 models by five different car companies dominated the best-selling lists, led all three months by two pick-up trucks, the Ford F-Series and the Chevy Silverado. The top-selling sedan was the Toyota Camry, and other popular passenger cars included the Honda Accord, Nissan Altima, and Ford Fusion.

The only SUV on the list was the Ford Escape, but this model includes all of the features that have made SUVs popular for nearly 20 years, without the notoriously poor gas mileage and large size. Unlike its larger cousins, the Escape is more compact and efficient, and comes with an optional electric/gas hybrid engine, offering green-minded drivers more flexibility.

While all of these automobiles are excellent buys depending on your needs and budget, one of them is consistently cheaper to insure.

EINSURANCE conducted an objective survey of insurance companies to determine which of the top-selling cars of 2013 got the best auto insurance quotes. The winner was the 2013 Ford Escape.

Many factors come into play when determining auto insurance rates, including safety features, rates of theft, and cost of repair of the vehicle to be insured, as well as the driving record, age, residence, and lifestyle of the vehicle’s main driver. For example, a person driving a luxury auto might pay higher insurance rates because where that person lives may increase the risk of theft or damage.

The Ford Escape comes with many state-of-the-art safety features, including side-impact airbags,  anti-rollover protection, and anti-theft features. While other vehicles may be more popular, the Ford Escape consistently got the lowest auto insurance quotes in our survey.

EINSURANCE is not obligated to any auto or insurance company. Its goal is to simply help people find the best information  and insurance rates online.

To conduct our survey, we researched auto insurance quotes for a  hypothetical single woman, 33 years old, holding postgraduate degrees, and employed as an accountant. She owned her home and had a clean driving record.

Our sample subject resided in one of four states: California, Illinois, Texas, and New York. For each vehicle, EINSURANCE used three companies: Progressive, Esurance, and Geico. We compiled 116 quotes in total, 29 for each zip code.Dodge Rams were not quoted through Esurance, because it did not list Dodge Ram pickups as an option.

Objective Analysis by EINSURANCE Can Help Drivers Save

Based on the analysis, the Ford Escape costs less to insure than the other nine vehicles on the top 10 list and could be the best buy for a new car in 2013.