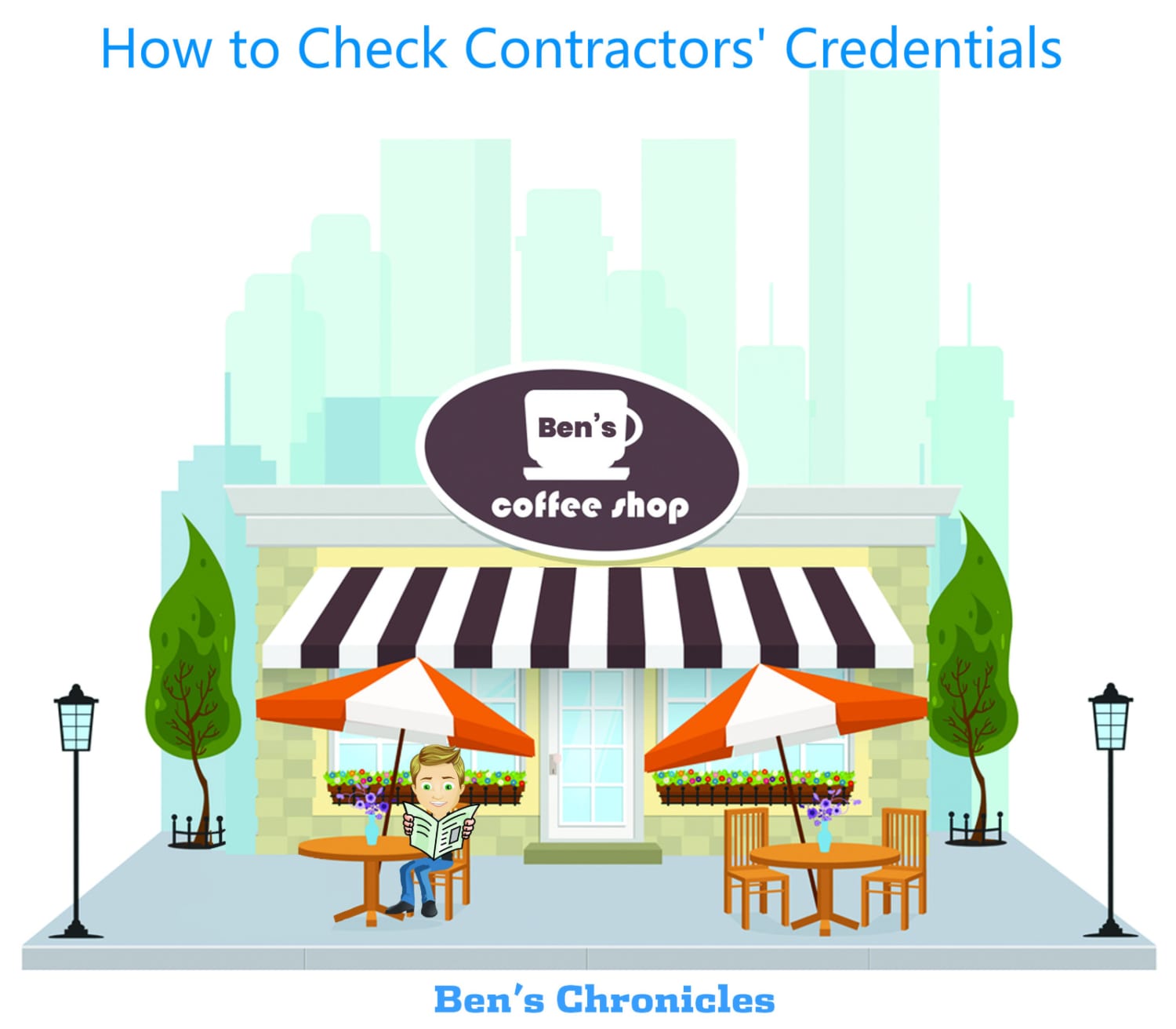 Hello! I’m Ben from EINSURANCE. Trust me, I know there are plenty of things we’d both probably rather be doing than discussing insurance. But although insurance gets a bad rap, it does have its benefits; especially when you find the right coverage and carrier.

Unfortunately, throughout my life I have had a knack for being at the wrong place, at the right time. Given my gravitational pull toward bad luck, I wanted to share a few of my life experiences with you in hopes that my bad luck could benefit you. So, bear with me over the upcoming weeks, because I’ll be sharing little nuggets I’ve learned through navigating the insurance world. If my mishaps and theories don’t directly help answer any of your insurance related questions, I promise they’ll make you laugh, albeit at my expense…

If you would like me to discuss a specific topic, feel free to email me at [email protected].

Today our topic is:

How to Check Contractors’ Credentials

Its tedious, but remember to check contractors’ credentials

Often times, I regret not learning a trade. In fact, even at my ripe age today, I still toy with the idea of going back to school to sharpen my cooking skills, or to perhaps learn how to tune up my own vehicle. I’m reminded of this fundamental flaw every time I take my car into the repair shop to get the oil changed, or when I need to call a plumber in the middle of the night because our sink is leaking. In each case, I sit back while the professional diagnoses the problem, and cross my fingers that the price she or he deems appropriate, is within my budget.

Typically, when you hire a tradesman, or any 3rdparty contractor, you’re not really thinking about much else other than addressing the task at hand. Or at least that is how I used to approach those situations. After purchasing my first my home, I no longer carry the myopic vision of simply having the contractor I call fix my issue. I now check contractors’ credentials to ensure the probability that

The purchase of my first home was a huge milestone in my life. As such, I wanted to be as hands on as possible. If I could, I would have probably tried to build the home myself. However, given my skillset or lack thereof, that would have been a horrible idea. The next best thing turned out to be hiring several different contractors to essentially rehab everything within the home’s four walls. If you have ever worked with contractors, then you know the process can be time consuming, and between material and labor costs, your investment increases at an alarming rate. For the most part, the contractors worked well with each other, and were responsive. Although it took almost twice as long as they initially forecasted it to take to complete, I was happy with the ultimate result.

Is that a leak?

One of the rooms I had rehabbed was the master bedroom’s suite bathroom. It boasted elaborate glass French dooring to enter the shower, with a built-in elevated step to enter the tub. Months after everything was complete, I finally found time to utilize my ‘grand’ bath. I began to fill the tub with water. Twenty minutes later it was finally full, and I entered it in hopes of relaxing. After the soothing bath, I proceeded downstairs to end the night with a bit of TV. As a I began to drift asleep, I homed in on a dripping sound. As my eyes followed the dripping water from the ground to its origin in the ceiling, I noticed an intense water mark that happened to be the exact same shape as the tub in the en suite bathroom. Being my first home, of course worst-case scenarios shot through my mind. What if the tub fell through the ceiling? What if this wasn’t caused by my tub, but perhaps an insidious problem that had never been addressed, and that I inherited? All valid issues, but none helped address the problem.

The first person I called was the general contractor that managed the rehab. Given it was the evening, I didn’t get an answer and was forced to wait until the next morning. Upon speaking with the general contractor, he mentioned it sounds like something the plumber should investigate, and given I hired the plumber, I should give him a call. Sure enough, I called the plumber. It was quickly approaching 24 hours since I first noticed the water stain on the ceiling, so my anxiety was at an all-time high. Thankfully, the plumber made it to my home in short order. Once he arrived, he inspected the ceiling and tub and swore that the issue was not his fault, and that such damage had to have been a problem that had been going on for years.

We went back and forth for quite some time, and given my lack of any trade knowledge, or more specifically plumbing, I didn’t have a strong stance. I then requested to view his insurance, as we could easily have had an inspector chosen by his company, determine if he was at fault or not. This drove our discourse into even further dismay. At the time, I simply thought he may have taken my request personally – as if I was personally attacking the job he had done. I now know that he simply did not have insurance. After hours of back and forth, we settled on him re-caulking the sides of the tub, re-painting the water stained ceiling, and if this did not do the job, I would need to hire someone to diagnose the problem further by cutting into the wall.

I was extremely lucky that this indeed solved the problem. However, the most important lesson I learned was that no matter the size of the job; if I’m hiring a handy man to paint a wall, or an electrician to install new lighting, I check contractors’ credentials. No matter the rush, anxiety, or sense of emergency, ensure your 3rdparty vendor carries appropriate insurance via verified website. Otherwise, you may end up paying out of pocket to fix any problem that may arise, AND, although the problem you are hiring the contractor for may be small/minor, it can cause outsized damage!

Best Campgrounds In The U.S.

EINSURANCE 6 Tips for Buying A Used Car
Scroll to top
×